In a horrific incident in Bihar, Dalit leader Shakti Malik was shot dead at his residence in Purnea district, Bihar, on Sunday. A former member of the Rashtriya Janata Dal, Malik was brutally attacked by unknown miscreants on Sunday.

It has been reported that the bike-borne men barged into Malik’s house when he was sleeping, and shot him in the head killing him on the spot.

Following the unexpected attack, a video in which Malik accused Tejashwi Prasad Yadav of demanding Rs 50 lakh as donation to give him party ticket to contest the poll from Raniganj seat and threatening to eliminate him if he continues with his good work in the constituency, went viral in no time.

RJD leaders Tejashwi and Tej Pratap Yadav have been named in an FIR for the murder of 37-year-old Malik.

The deceased’s wife, Khushboo Devi, claimed a political conspiracy behind his husband’s death. She said, “My husband was feeding our child in the courtyard this morning when 3 masked goons made their way inside the house and shot him dead. They ran away in no time.” It is said that Malik was about to contest Assembly elections as an independent candidate after his expulsion from RJD.

It is being told that Shakti Malik (37) was all set to contest the upcoming assembly elections as an independent candidate after he was expelled from the party led by former Bihar chief minister Lalu Prasad Yadav.

Many videos are being shared on social media after Shakti’s assassination. Malik was gunned down by three masked men who barged into his home in Purnea district at around 3 am in the early hours of Sunday. His wife, children and driver were the only ones at home at the time. Going by reports, Malik was rushed to the Sadar Hospital where doctors declared brought dead on arrival. Meanwhile, police started a probe in the matter.

The Rashtriya Janata Dal (RJD) has demanded a CBI probe into the killing of Shakti Malik. An FIR was registered against Tejashwi, Tej Pratap Yadav and four others in connection with the murder.

“We are investigating the case from every angle. Three bullets were pumped into the body of the RJD leader. Police has recovered loaded weapon from the crime scene”, said Vishal Sharma, Purnia SP. 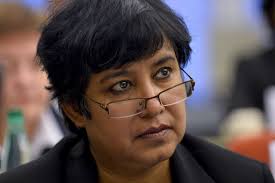 In 2023, you can reach Delhi to Mumbai in just 10 hours- Thanks to Indian Railways

Rahul congrats Airforce on getting 5 Rafales, but asked 3 Questions to Modi Government