Doctors play an important role in society. They care about patients and give them proper treatment in a bid to restore patients’ health back to normal. Even in critical condition, doctors give their heart out to save the lives and that’s why they are considered second to God in India. Let’s take a look at three doctors who saved people’s lives in emergency situations.

When Meghalaya lady doctor learnt that a pregnant lady was desperately in need of assistance, she sprung into action and decided to offer much-needed help to her in the need of the hour by driving her in an ambulance from Garobadha PHC to Maternity and Child Hospital (MCH) Tura.

The pregnant woman had been admitted with some serious complications at Garobadha PHC Sangma’s workplace. But as there were no proper facilities of handling her at the PHC, the doctors planned to transfer her quickly to MCH Tura for medical treatment.

With her health slowly going down, without wasting any time, the doctor immediately took her to the hospital in Tura.

This is when doctor Sangma became a saviour for the helpless pregnant lady as she worked beyond the call of duty to drive her to the hospital safely from the remote place in an ambulance.

In fact, the lady doctor was the only one at the hospital who truly lived up and helped the woman through and through. Hats off Sangma!

Doctor carries tribal woman and her newborn twins for 5 km

In a remote village of Telangana, the government doctor carried his patients to the hospital and ensured that they got medical assistance at the right time.

His patient, a tribal woman suffered from postpartum haemorrhage, means heavy bleeding soon after childbirth. She gave birth to new-born male twins with low-birth-weight in Ralla Cheluka, which is a village in Palvancha Mandal.

And seeing that she needed to be taken to a hospital immediately, this doctor jumped into action.

Dr. L. Rambabu, who is a Medical Officer at the Primary Health Centre (PHC) in Ulvanoor had carried 22-year-old Sukki and her babies in a makeshift stretcher for about 5 kilometres to the nearest road point, as reported by The Hindu.

The mother and the two babies were then shifted to the government area hospital in Bhadrachalam town.

“I found the tribal woman lying in hypovolemic condition (decreased blood volume or diminished body fluid) with postpartum haemorrhage along with her new-born twin babies weighing 2 kg and 1.75 kg each.

As chances of the twin babies developing infection and sepsis due to unhygienic conditions and cutting the umbilical cord in septic environment were high, we, along with the family members carried the trio to the road point at Mamidigudem on a doli and shifted them to the government hospital in Bhadrachalam,” the report quotes the doctor as saying.

The shocking incident again draws attention to the poor connectivity of remote tribal areas to community roads and towns.

The politicians on TV channels claim that they would transform remote areas into well-developed places but on the ground level, the truth is entirely different as there is no access to an ambulance in emergency situations.

Fortunately, the doctor was available and he worked beyond the call of duty to rescue three lives in the need of the hour.

Odisha doctor Dr. Omkar Hota certainly deserves a ton of credit for pushing himself beyond human imagination. It is because of his heroics, Subhama Marse gave birth to a baby. Things were not going too well with Subhama when she started to bleed heavily.

As soon as the doctor Hota received information, he immediately sprung into action and carried the tribal woman on the cot and undertook a 10 km journey on foot. The doctor did exactly what the superhero would do as he rushed to the Public Health Centre (PHC) to admit the woman. It is not that easy to walk through the jungles shouldering the patient but the super doctor made it look so.

Soon after the Odisha doctor joined at the medical centre, he undertook a journey to visit villages and to interact with people, telling them to come to the hospital if they are ill, as reported by Rediff.

According to Dr Hota, Subhama is surely not the first patient he carried to the hospital. “There have been cases of poisoning in the jungle where the patient has to be rushed immediately to the hospital. Or take the cases of the old and elderly for that matter, it is simply not possible for them to walk through the jungles,” he told Outlook magazine.

Dr Hota’s spell as a medical practitioner in the Maoist hinterland has been so far so good throughout the year. He never paid much attention to personal discomfort. The selfless doctor had promised his mother that he would become a doctor of the top-most level and treat the needy.

At an event organised last year, the Odisha Chief Minister, Naveen Patnaik, appreciated him for his selfless service. The award was introduced in the name of Utkalmani Gopabandhu Das, another person who is a symbol of sacrifice and selfless service.

Apart from that, at a recent event organised by UNICEF, Actress Kareena Kapoor Khan felicitated while speaking highly of Dr Hota’s work. She strongly believes that every mother needs a safe pair of hands while giving birth to her baby. 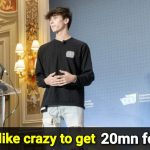 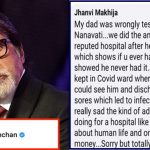