The so-called star kids of already established ones are already in the headlines for all the reasons and are allowed to stay in the film industry there despite their success or failure. On the contrary, talented ones are struggling to set their feet. To make things worse, the Bollywood industry even leaves people when they go through bad times. For instance, Sushant Singh’s death by suicide.

Now, the fans are urging netizens to unfollow Karan Johar, star kids, and the nepotism gang on social media as part of the boycott nepotism protest.

During the protest, one of the fans went on comment on Irrfan Khan’s son, Babil’s Instagram post. The user had asked Babil to unfollow star kids and ‘raise a voice against nepotism in the ‘Bollywood industry.’ Babil who came across this message, went on to reply with a message.

He added, “brother, do you understand the pressures and expectations of being the son of someone who changed the concept of acting in Indian cinema? I understand your frustration against nepotism, but there are two sides to every coin.”

After coming to know the news about Sushant’s suicide, Babil shared a throwback pic of the actor and wrote, “WTF is happening? I can’t find the words :’,(/. Man, if you feel clear signs, don’t go searching for a reason, please go to the doctor instead.”

On another post, Babil was asked whether he plans to make his debut in Bollywood to which he said, “hopefully I will go where my wishes take me. Actor, musician, director, producer and something to do with physics. There are my aspirations.” 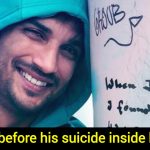