Bollywood emerging actor Sushant Singh Rajput committed suicide on June 14 (Sunday). His unexpected demise left everyone in shock, including his co-actress and ex-girlfriend Ankita Lokhande. As per various news outlets, the 34-year-old actor ended his life by hanging himself to the ceiling fan at his residence in Mumbai.

His death by suicide was because he was going through mental bouts of depression. Though the reason was still unclear, the whole nation has been indicting nepotism for the death of this extremely talented actor.

Died at an early age of 34, Sushant Singh Rajput left behind assets worth of crores.

In his staggering journey, i.e. from rise to fame, it is believed that he has amassed a whopping sum of Rs 39 crores. As per the figures, he used to charge around Rs 5-7 crores for every movie that he had acted.

Besides being a part of a very few films, he still managed to convey a very strong message to audience and that made him a crowd favourite.

Amidst all the growing speculations of space travel becoming a reality, Sushant was so fascinated by the cosmic developments that he even went on to purcahse a plot on the moon and thus becoming the first Bollywood star to buy land on the moon.

The star purchased apiece of lunar land on the far side of the moon, in a region called the Mare Muscoviense or the ‘Sea of Muscovy.’ He had also bought the property from the International Lunar Lands Registry.

He was extremely intrigued by the American space agency – National Aeronautics and Space Administration and Indian space agency – Indian Space Research Organisation. His wish list also had a huge wish of sending at least 50 children each year to space research centres.

In February, this year, KRK had tweeted: “According to our sources #Dharma #SajidNadiadwala #YRF #TSeries #SalmanKhan #DineshVijan #Balaji have banned #sushantsinghRajput! So now he can do web series or TV serials only. Superb!!.”

Jay Shree also took to Facebook and asked her friends and followers to sign the petition and get 2 Million signatures so that type of incidents are not repeated again in future. Besides this, people of Patna from where Sushant Singh Rajput belonged have burnt effigies of bigwigs – Karan Johar and Salman Khan. In fact, they have also taken a pledge that they would not allow their movies release in the city. 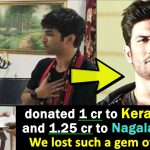 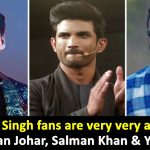