Mt Everest, the highest peak in the world which is situated in Nepal is now clearly visible from a village in Bihar. Yes, residents of Bihar’s Singhwahini village woke up to a breath-taking view of Mount Everest from their homes.

The enhanced Air Quality Index (AQI), less traffic and a lack of industrial activities led to a significant decrease in air pollution. Due to this nature has flourished in humans’ absence.

A Twitter user shared images of Mount Everest from her terrace and tweeted that they could witness the highest peak from their terrace in Singhwahini village. She opened up in her tweet that some mountains near Nepal can usually be seen after the monsoon season.

However, this is the first time that the highest peak is visible from her village.

This very same picture was tweeted by IFS Parveen Kaswan. But he had tweeted this with detailed information. IFS Parveen Kaswan had shared a local newspaper report where the elderly people of the village claim that the Himalayan range is clearly visible now because of lack of pollution.

The highest peak used to be visible some decades ago.

When people of Singhwahini village, Bihar saw Everest from their own houses. They say this happened after decades. The claims are made by Mukhiya of the village. Can be verified further. They are saying they are able to see these peaks after many years. Even decades. 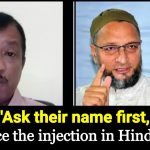