People performing dangerous stunts on trains is not a new story in our country. A video is being circulated on social media in which a guy can be seen performing stunts without even caring about his life or family.

However, he is not seeing the adverse effects of what daredevil stunts. We have seen people getting banged by the posts suffering major injuries while doing this stunt and sometimes people have even lost their lives.

In a video that is doing the rounds on Twitter, a young boy is seen falling off a running train’s door. He almost fell under the wheels, while allegedly trying to do a ‘stunt’. The terrifying incident was shot on TikTok and in the first few seconds, it appears like the boy is getting run over on the tracks.

At last, the boy somehow manages to survive the fall with good luck.

The shocking clip was shared by the Ministry of Indian Railways on Twitter as a sign of warning. The caption read, “Getting off and climbing a moving train is fatal. Watch him lose his life in the course of a stunt, but every time luck will not be with him.”

The Ministry also ent on to urge people not to involve in such activities and also prevent someone from trying to do the same stunt. “Do not put your life at stake in a stunt affair !!” it added. 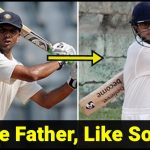