At an age when students are thinking about their career, the 19-year-old Gopal Jee has bagged a few patents in his name and has got invitations from NASA as well as 8 other countries. But he prefers to work with Indian Govt. and says – ‘ Apna desh apna hi hota hai !’.

Gopal Jee, a resident of Naugachia village of Bhagalpur district in Bihar, never got restricted by the limitations and always had an eye for the problems around. His father Prem Ranjan Kunwar, a marginal farmer, has banana plants in his field. On asking why he chose banana, Gopal says – “I observed that thousands of acres of banana plants kept rotting in the floodplains of his area after floods. I tried to put the waste of banana plants to use and was able to produce charge from it.” He has a patent named “Banana Bio Cell” in his name. He wants to solve problems for the nation and suggests students to observe the problems in their respective areas and to try solving them with research.

He has also prepared an alloy which is resistant to very high temperature and named it ‘Goponium alloy”. Despite the lack of resources, he kept doing his research. “Failure is the first attempt to success” inspired by these words of APJ Abdul Kalam, Gopal believes in himself and never gives up. Scientists from other countries have visited him to know about his research activities. Gopal has a high aim of grooming 100 innovators and thus empowering the youth to contribute more to the nation. He has already set out his plans to fulfill his aim as he strongly believes that good work is always appreciated. He believes that one should never give up, no matter how tough the situation is.

In the year 2017, he met Prime Minister Narendra Modi for few minutes and from there he was sent to National Innovation Foundation (NIF), Ahmedabad, where he made 3-4 inventions, that was the biggest turning point in his life and he started getting offers from abroad, but he always had an innate sense of making a significant contribution to the country so that he could do something for the betterment of the society.

Gopal Jee has four siblings and he is third among them. Sharing his experience Gopal Jee says that 75% of the students in the country are facing the kind of poverty and hurdles in education. “My father just earned enough to make both ends somehow meet. He sent my sister to maternal grandparents’ place, as there was not enough space in the small house we lived in,” said Gopal.

He was also invited from Dubai to be the chief speaker at the annual conference. When asked about his likes, he said – “I like talking to children”. Today, he has touched the pinnacle of success and is earning well as the brand ambassador of a digital educational platform. 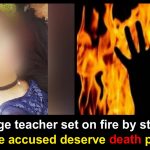