Ever since the inception of Motorsports, it was best suited only for men however Bengaluru-based woman biker Aishwarya Pissay broke gender stereotypes as she became the first Indian in history of motorsports to win a world title.

So, winning the World Cup is huge for me. It’s an absolute honour to be the first athlete to bring home a world championship title and put India on the map of international motorsports,” she added.

She went on to finish second in the junior category in which both men and women competed against each other and Aishwarya finished with 46 points behind championship winner Tomas de Gavardo (60 points) of Chile. However, the 23-year-old’s ambition is quite clear now as she wants to make India proud at the Dakar Rally.

“I have had two major accidents. One in which I hurt my collar bone in 2017, then I had a bad fall and ruptured my pancreas in 2018. I underwent surgery and was in the hospital for two months. There was not a single day in the hospital that I thought I would not be able to race again. That incident taught me the importance of never giving up,” she recalled. 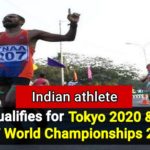