Hima Das is officially India’s run-machine now. Her exemplary appetite to win gold medals for India sets her a class apart from most other athletes in the country. This is why Hima Das is so special and to make things good, she is only 19 years old.

It is not that easy for an athlete to win a gold for the nation. One has to be physically fit as a fiddle to cross all hurdles in life and Hima Das ensured to tick all the boxes in her training. Her hard work reaped her the much-needed rewards.

Hima Das who won the U-20 World Championships last year, once again stole the spotlight as she won sixth gold of the month on Thursday as she returned to her pet event, the 400m race, in the Czech Republic according to Dainik Jagran.

Not just one but six gold medals for Hima Das in 21 days is something extraordinary but to Hima’s standards anything is achievable now considering her winning prowess. Though her gold medal rush draws big round of applause, the real test awaits for India’s golden girl.

Hima still needs to make the cut for World Championships, and from there on, work harder than ever before in order to claim a prestigious ticket for the Tokyo Olympics 2020 to carve out a reputation for herself as one of the world’s top athletes.

Likewise, Hima Das won six gold medals on the trot and she too deserves a big reward for her achievement. Cricket isn’t the only sport in India.

Hima Das deserves a massive reward like Yuvraj Singh. Kindly share this article with your friends and others if you agree with this statement. 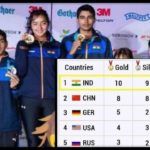