In good news for India, wrestler Vinesh Phogat won her second consecutive gold medal in 53kg, clinching the Yasar Dogu International by outsmarting Ekaterina Poleshchuk in all aspects of the game.

Vinesh who had just won last week at the Grand Prix of Spain once again brought the best out of herself in the tournament as she got the better of the Russian opponent 9-5 in the final stage.

It is good to see Indian talents winning medals for the country and in fact, this was the third gold in the women’s competition for India after Seema (50kg) and Manju (59kg) came through with flying colours in their respective categories.

During the course of a gold medal bout, Vinesh clinched two of her three bouts by Technical Superiority.

As far as Divya Kakran is concerned, she who won a gold (68 kg) in Madrid, and Pooja Dhanda (57kg), who settled for silver, did not reach the medal rounds. While Divya could not make it to the qualification round, Pooja lost in the quarterfinals.

In men’s freestyle, Rahul Aware (61kg) clinched his first-career Ranking Series title with a sensational 4-1 victory over Munir Aktas of Turkey. Utkarsh Kale settled for bronze in the same category.

Deepak Punia won silver in the 86kg after losing the final to Azerbaijan’s Aleksandr Gostiyev 2-7. Sumit won bronze in the 125kg. 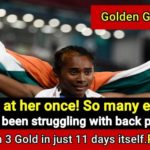