Mumbai residents get a good supply of water from the upper Vaitarna Dam in Nashik’s Trimbakeshwar taluka which is situated 120 km, has a capacity of 330 million cubic meters.

But on the contrary, women living in the tribal settlement of Barde-Chi-Wadi which is less than 2 km away from the shore of the dam, face huge problems as they have to rappel down a 60-foot-long well more than 15 times in order to get water for their family.

Politicians on TV channels and on social media claim that they would do anything for their people if they are voted to power but on the ground level, the truth is different. Yes, not even one political party in the Nashik Lok Sabha constituency has even spoken about the issue in their election campaigns.

In the tribal village of 50 families, this is the only well available and women have to get up at 2 am in the morning to get water. We will leave it to your imagination now. The situation gets from bad to worse particularly in the summer season when the water level in the well drops down and the women have to rappel down.

“Mumbai survives because of the water it gets from this area. Ironically, people who live a stone’s throw away from the reservoir, do not get water. This is a massive problem, yet hardly anyone chooses to speak about it,” social activist Bhagwan Madhe said.

Sadly, even the pipeline and two available storage tanks provided by the administration are non-functional and in fact, no measures were taken to repair despite there have been frequent complaints to local leaders and authorities.

“Only women have the courage to go down the well. The men of the village avoid doing it. I fear for my life every time I am forced to go down. But if I don’t, I know that my family will not have water to drink,” Asha Pardhi, one of the residents, explained in an interview with The Indian Express.

“We spend five to six hours every day to get water, as close to 50 families need water from the same well. If we want to save time, we have to do it in the night, which is dangerous,” Mangal Mengal, another resident added. 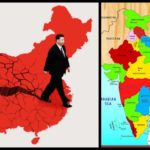