Navjot Singh Sidhu has come under fire for his infamous remark on Pulwama terror attack. His statement didn’t go down well with social media users because of which they targeted Sidhu time and again.

People on social media wanted Sidhu to be kicked out of The Kapil Sharma Show and in fact, Sidhu was even trending on Twitter for the same reason. But now, the channel has asked him to leave the show, which means Archana Puran Singh will replace him.

A top source close to the channel told Indian Express that, “His remarks have not been taken kindly by most. Also, the channel and the show was getting dragged into the unwanted controversy. This is when the team amicably decided that Navjot make a distance from the show. The team has already shot a couple of episodes with Archana.”

After the Pulwama attack, Sidhu had said, “For a handful of people, can you blame the entire nation and can you blame an individual? It (the attack) is a cowardly act and I condemn it firmly. Violence is always condemnable and those who did it must be punished”. His comment did not go down well with the netizens and also made #BoycottKapilSharmaShow trend on Twitter yesterday.

It has been said that the Retired Major General GD Bakshi also targeted Sidhu for his “offensive comment”. He went on to add that Sidhu has not experienced what the CRPF has, what jawans in dress code routinely do in dangerous areas.

(With inputs from Shivangi Thakur) 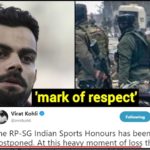