In an outrageous attack on security forces in Jammu and Kashmir, at least 40 CRPF personnel were martyred and several others were injured when a Jaish suicide bomber rammed a vehicle carrying over 350 kg of explosives into a CRPF convoy of 70 vehicles in Jammu and Kashmir’s Pulwama district.

“The U.S. Mission in India strongly condemns today’s terrorist attack in Jammu & Kashmir. We send our heartfelt condolences to the families of the victims. The United States stands alongside India in confronting terror and defeating it. #KashmirTerrorAttack,” US representative to India Ken Juster tweeted.

Russian President Vladimir Puttin also offered heartfelt condolences on the dastardly terror attack in Jammu and Kashmir. “Please accept the most sincere condolences in connection with the loss of Indian law enforcement officers in the terrorist act in the state of Jammu and Kashmir,” Putin said.

“We strongly condemn this brutal crime. The perpetrators and sponsors of this attack. undoubtedly. should be duly punished,” Putin said.

“I would like to reiterate the readiness for further strengthening counterterrorist cooperation with Indian partners. In Russia. we share the grief of friendly people of India and hope for a speedy recovery of the injured,” Putin said.

“Israel strongly condemns the terror attack in #Pulwama and stands by our Indian friends during this difficult hour. We send our deepest condolences to the CPRF and their families, the people of India and the Indian government following the terrible,” Ron Malka who is official Ambassador of Israel to India and Sri Lanka.

Sri Lankan PM Ranil Wickremasinghe mentioned this as the worst ever terror attack in Jammu and Kashmir since 1989. Foreign Ministers of Maldives, as well as Bhutan, extended support to the Modi government after the attack. Bangladesh PM too extended support to India to battle terror jointly after yesterday’s attack. 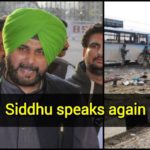