Omar Saleem Peerzada, AMU PRO said, “We have come to know of the highly objectionable tweet. Taking immediate cognizance the student has been suspended by the university administration”.

Aligarh: An FIR has been registered against Basim Hilal, a student of Aligarh Muslim University, for his tweet over yesterday's #PulwamaAttack . He has been booked under section 153A IPC & Section 67A of the IT Act. Hilal has been suspended by the University.

Peerzada also added that the university has a ‘zero tolerance policy’ for this kind of issues and it won’t let the University lose credibility. ANI reported. “The student hails from Kashmir and was a BSc Mathematics student,” he added.

Omar Saleem Peerzada, AMU PRO on Basim Hilal: We've come to know of the highly objectionable tweet. Taking immediate cognizance he has been suspended by AMU admn. We won't let the University be discredited. We've zero tolerance. He hails from Kashmir&was a BSc Mathematics student pic.twitter.com/02IzJxIvYm

The report added that FIR has been filed against Basim Hilal for his tweet that said “How’s the Jaish? Great Sir”.

“He has been booked under section 153A IPC and Section 67A of the IT Act,” Peerzada said.

It’s not just individual’s fault but there have been a lot of widespread speculations on social media about this, where pro-Pakistani handles are saying ‘Hows The Jaish?’, a parody on ‘Hows The Josh?’, which is a famous line from the movie Uri: The Surgical Strike. 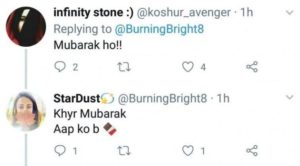 When Sons made their Fathers proud: Best thing you’ll read on the internet today!