There is no hiding to the fact that some animals do not hesitate to adopt other animals. The video below will tell the whole story. As you can see a cow is feeding four orphaned puppies. This is the best thing which you will see on the internet.

When animals can be together and live a happy life by sharing and spreading love why can’t humans be like that? This video teaches us a big lesson to learn from the animal kingdom. Mother’s love is immeasurable and this video serves as a testament to the fact.

The video was filmed by a passerby who then took to social media to share this video. Ever since it was uploaded, the video went viral. According to some accounts, the mother of the four puppies might have died after giving birth and those puppies were adopted by the cow who is seen feeding them without any hesitation. 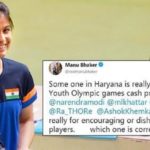