A video has been doing the rounds on social media platform where transgenders are seen stripping and dancing nude, creating noise on the Signature Bridge in Delhi. It was only recently, we saw some men doing mad things on the bridge by taking selfies and some threw slippers.

Little did we know that transgenders would take such extreme steps to create a ruckus on the bridge which is deemed contrary to the spirit of human values. Nobody saw this coming! As you can see in the video, transgenders can be seen stripping in a group and dancing subsequently while the passersby recording and making a video out of it.

The video shows that a group of girls removed clothes. However, some news reports suggest that they are transgenders. Either way, removing clothes in the public domain and making people uncomfortable is no good by any means.

The group of transgenders arrived at the spot on two-wheelers and the registration number of vehicles can also be seen in the video. The whole incident led to a noisy situation on the newly inaugurated Signature Bridge in Delhi. A case has been filed and cops are further investigating the matter. 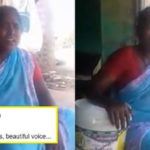