It takes a lot of guts to save someone who is in a dangerous situation. There are some people who are always willing to risk their lives without even caring about theirs. Look at the video below, a rail worker sprung into action and risked his life only to save a man from a disaster.

The drunken man was carrying his cycle with an aim to cross the railway track. He initially stumbled and he barely had the energy to balance but somehow he managed to put the cycle to the other side of the track. Unfortunately, some of his belongings happened to fall on the track.

But little did he know that a train would come that fast as he was busy collecting the things that had gone down. However, a rail worker spotted the fast moving train approaching in a near distance. He shouted, screamed at the man who was still collecting things on the track.

So, the rail worker decided to sprint towards him and save his life. Had it not been for rail worker’s presence of mind, things could have been a different story altogether. Hat’s off to this man who risked his life to save him. We need to appreciate him for his extraordinary tale of bravery.

The video was uploaded on Facebook and it got instant reactions with more than 10 million views. Watch the video below to get a better clarity on the incident: 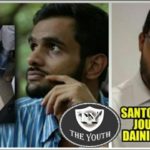