In today’s world, it is tough to find people who do favours and good deeds to others. While some don’t even bat an eye on other’s lives as they only care about themselves, there will always be some who would give absolutely everything to satisfy the poor and the needy. This goes to show that Humanity still exists in this world.

Have you come across student doing side activity in an attempt to make a huge impact in others’ lives? MBBS Student drives an auto in Bangalore to raise money for the poor and needy. Whatever revenues he generates through auto driving is not for himself but for those who are in need. He always asks the customers to put their amount on the satisfactory ride he offers.

The nameless hero with social intelligence gives the whole money to the ones after the end of every month. He is believed to be studying the fifth year of the prestigious course and is one of the nicest human beings you will ever see. Barely few people know his complete story and it was one of the customers who happened to meet the auto driver by chance was absolutely shocked to see such a nice person.

Expect the Unexpected in life:

Bangalore resident Vineeth Vijayan was on his way to meet up with his friend’s mother at a medical college, where she was admitted. To get to the destination, he traveled by auto and bumped into a person whose age was believed to be around 20. He asked the auto driver to drive a tad slow as the customer had immense back pain.

In reply to Vijayan, the auto-driver smiled and said ‘okay sir’ and from this convo, the resident Vijayan came to know that he was a polite driver. Interestingly, the driver happened to be an MBBS student at the medical college. Unfortunately, his father drew his last breath three years ago whereas his brother was paralyzed. He has two younger sisters.

The auto was gifted to him by the college for securing good marks and since then, the nameless hero has been giving free rides for the people to the medical college. He doesn’t charge like other auto-drivers based on the meter ticks but has a donation box with a message saying, “Donation for the poor and needy people”.

“I asked him ‘how much’ and in return, he pointed to a box kept near to his seat and replied: ‘Put anything that you think is satisfactory for this ride’,” writes Vijayan in a Facebook post.

After reaching the destination, the college guard came rushing towards the auto in an attempt to move the auto from the gate but when he saw the student, he greeted him with respect saying, “Namaskar sir”. Vijayan was stunned to see this reception and was told about the story by the guard. 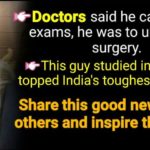